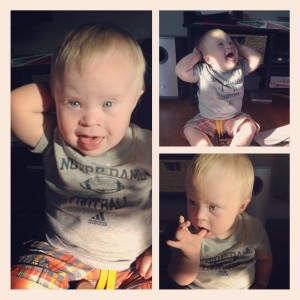 I’m a bit of a wordy. I love words almost as much as I love good cheese and milk. In case you don’t know me, that’s a whole freaking lot.

Learning that Dexter would have a tough time with speech was tough to take. Early on I was determined to nurse him, because it was what I planned to do all along and because I heard that it could really help improve speech. I also “wore” Dexter in a soft carrier pretty frequently vs. using a stroller or putting him down. The thought that he’d be closer to my face, hear sounds more clearly and also get lots vertical tummy time (which helps build muscles for sound production) just made sense. And again I wore my daughter too. Last, but not least, I count on my ever-chattering Eloise to rub off on him.

Around 6 months I eagerly awaited some baby signs or short words and was then deflated when they didn’t come. There were a couple of times shortly after this when a word did come and I would get so excited. At speech therapy Dexter was shown a puzzle piece with a bunny on it and when asked he said bunny, clear as day; just once and then never again.

Between then and now Dexter has started to pick up lots of signs. He is the king of milk, signs for food with gusto (he is certainly my son) and knows how to ask for more. He’s also become great at all-done, papa/mama, tired and my favorite poop.

Then the other night as Dex and I settled into the rocking chair he sat up on my lap for a bit to honk my nose and play. Then he tapped his head and said head, clear as day. I was overjoyed! You said head, I said. And again he tapped his head and said head – just like the dictionary says you should [hed]. I called Jason in and tried to get him to do it again. By now he was making the tired sign and he gave Jason a less clear rendition.

In the morning I feared head would vanish like bunny. But, after he woke up a tad, he did it again. And then I swear he tried to say Eloise. It sounds a bit like Dory speaking whale in Finding Nemo. Anyway we’re so happy to hear our little mans words.

This entry was posted in Uncategorized. Bookmark the permalink.